Thanks to Massey University and Kauri Park Nursuries Palmerston North, 16 visiting Japanese students helped us get more trees in the ground for both the birds and bank stabilisation in August 2019. None of the students had ever planted a tree before but after instruction took to the task most eagerly, and helped us plant heaps! We then took them through Kaikawaka reserve next door to show what their planting would one day become. A very enjoyable, educational and productive experience. 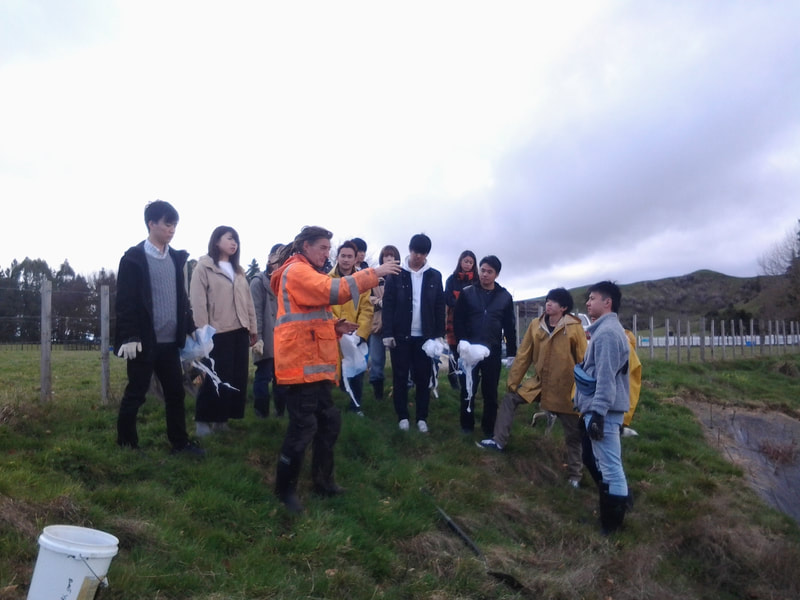 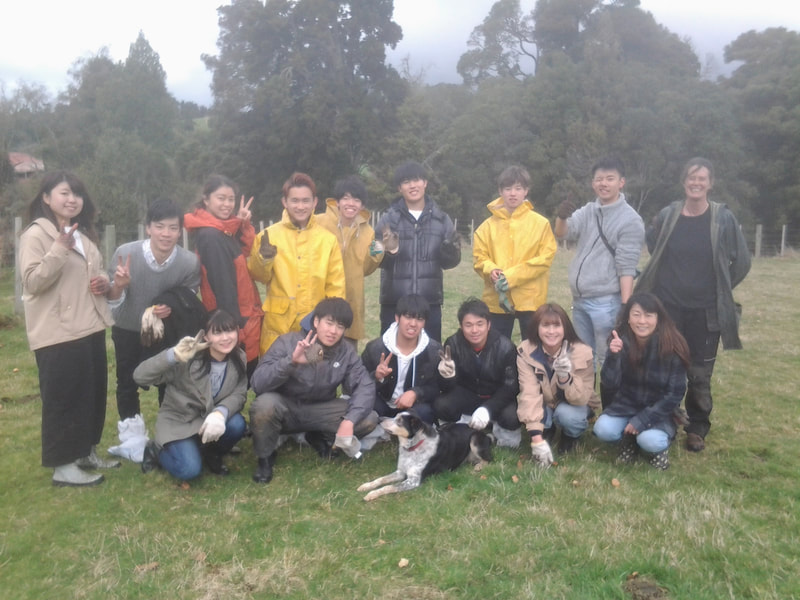 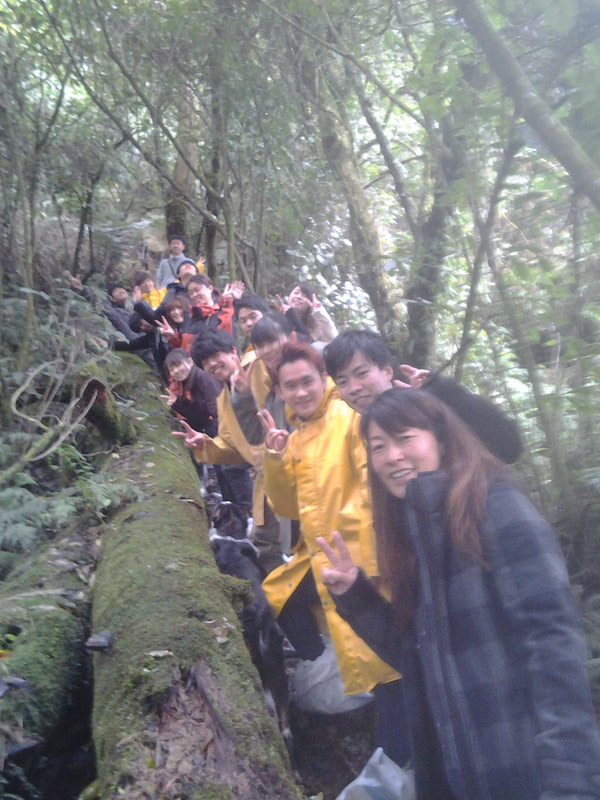 Alongside our outreach as Junk and Disorderly, and running an Environmental Arts Centre, we also keep busy in our local environment.
Beautifully sited within 5 minutes walk of 3 Native Reserves, of sizes varying from 6 acres to 130 acres, we have given ourselves the task of making green corridors to link the reserves, providing safer passage for wildlife.
Stream beds are being fenced off with financial help from Horizons Regional Council, and gaining a Community Grant of $1300.00 towards plants has helped get our Taniwha planted up. (July August 2014)
We had a full REACT crew and a few more locals the day staff from Te Manawa Museum (Palmerston North) came out to help plant.
Many many thanks for this kickstart everybody, it really pushed the project along.
The last plants went in over several more informal workdays, and things are looking good after the rains.

﻿ ﻿Having seen the symbiotic relationship Kereru have with the Kowhai, our next planting mission is to create some "Kowhai Corridors' along the paper roads, linking to future stream bed planting and the linking of the 3 reserves totally.
Donations of Kowhai ('volunteers') from local gardens has started and having sourced plants from Whanganui Prison Nursery thanks to Horizons, we will be starting planting again next Autumn (2016).
Community Planting Date set for Conservation week Sunday September 18th from 10am.
​For more info on workday:  press the button..
Workday details

DEALING WITH DARWINS BARBARY AND OTHER INVASIVE PESTS

Over our years here, we have had the fun battle of trying to clear Darwins Barbary from McKinnon's Reserve, next door to 2467 Rangiwahia Road.  A truely pernicious plant, it can regrow from next to nothing. So the battle goes on. The involvement of Wwoofers, Visitors and members is ongoing, and once again thanks to Horizons Regional Council for donation of Toxic death paste. Our policy of organic fails miserably when confronted by Barbary, such is its vigour.
We do see improvements in the bush, and although the job is far from finished, we have been able to come out from the bush and start making plans for green corridors to link reserves for birds and all other living things.
To this end, fences have started to go in preserve stream beds from domestic grazers. Planting design is also being directed at erosion control. The Taniwha is now growing!
Want to get involved? 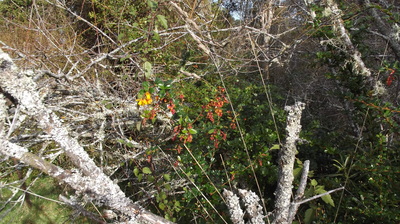 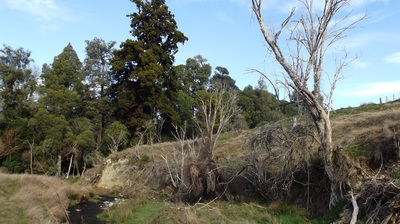 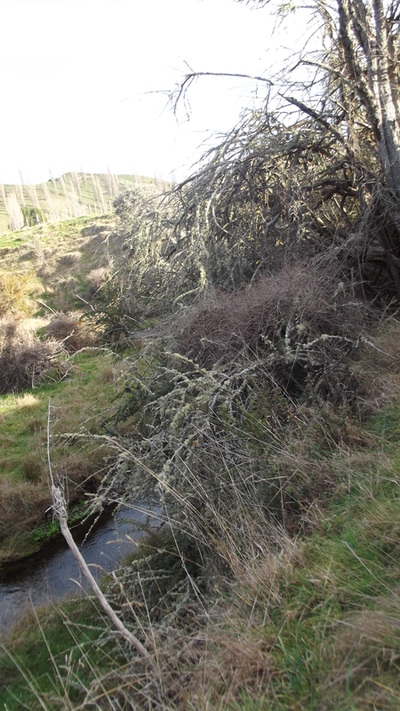 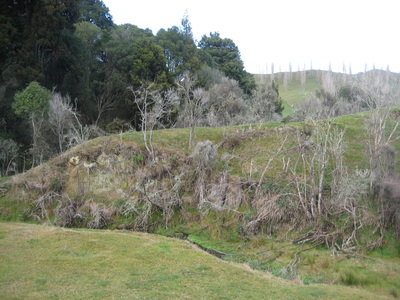 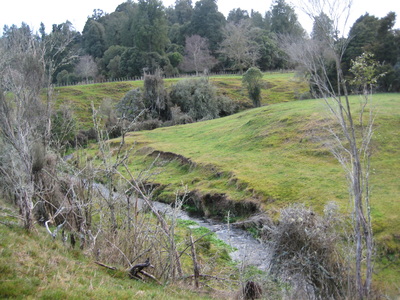 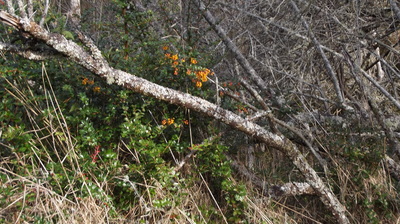 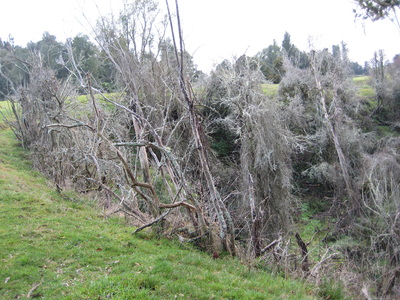 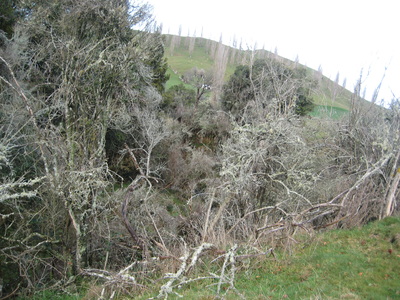 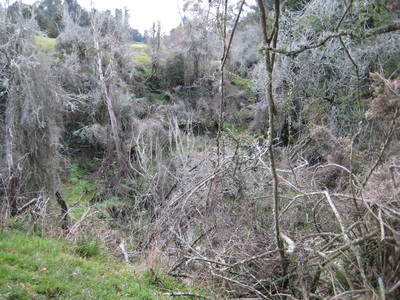 Dealing with the consequences of past District Council policy of spraying from above - Death of natives whilst Darwins Barbary proliferates.  Clearance of all this dead wood took place at a community workday prior to Taniwha planting, with the bonfire saved for November 2014 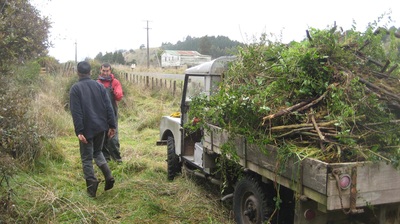 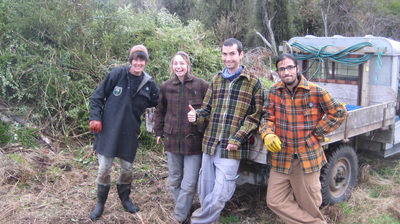 Wwoofers and REACTer after Barbary Bash 2012 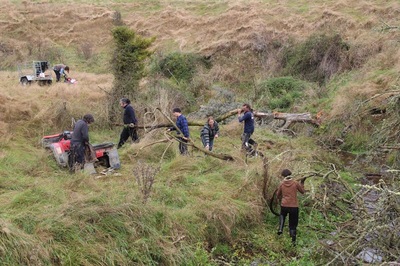