An exepedition of 18 months that started in the UK July 2003
and finished in Aotearoa New Zealand.
We travelled through many, many countries and did projects in some of them

An expedition that started in Scotland and ended in New Zealand across many nations.
When Jim and Bridgette decided to move on from the UK scene and return to NZ (jim a new immigrant) they decided not to fly back but take a Truck overland, loaded to the gills with resources for projects in communities along the way.
18 awesome months in Beattie the mobile workshop/ house truck,
with projects in Croatia, Bosnia,  Kosovo, Turkey, Turkmenisatn, Uzbekistan and Afghanistan.
Working with Schools, Orphanages, Special needs units and hospitals alongside recognised
NGO's such as Acted and War Child (Holland), UNESCO and the British Council.
Painting, sculpture, Giant Puppets, Lanterns, Art in all forms & teaching the teachers about Scrap Carnival.
Aotearoa Bound is the seed from which Rangiwahia Environmental Arts Centre grew from. 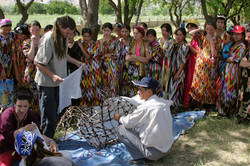 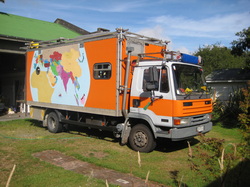